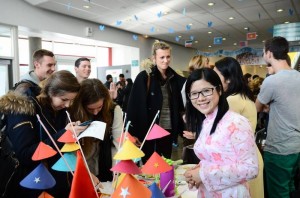 IÉSEG is known and recognised for the strong international dimension it has on its campuses. This atmosphere is particularly due to 1300 foreign students (70 nationalities), who come to study each year on our two campuses. IÉSEG has developed many activities with the French students to improve their integration in the School in order to mix cultures, promote acceptance of others and practise the various languages which are offered.

The PASO DOBLE project was created for French beginners in Spanish and Spanish-speaking students who want to learn French. The objective is that students work together in pairs in order to help them progress in French and Spanish and raise awareness of their respective cultures. These projects end with an oral presentation of the pairs in front of their fellow students.

Again with the view to improving the use of language and the integration of international students, the TANDEM project proposes regular meetings between the French and exchange students. The students have to meet several times during the semester at their convenience (at school, at home, the cinema, at restaurants, local markets, families …) to spend time together and practise speaking.

LES “JEUDIS DU MONDE”(literally “The Thursdays of the World”)

The “Thursdays of the World” focus on our international students. For just one day, they become ambassadors of their country with a stand on the school premises where they present their cuisine, history, cultures, traditions …

Drama is another fun way of practising languages! IÉSEG proposes sessions to create sketches and to perform in short theatre plays with the foreign students. Students can act out a play using the languages learned at the School whilst the exchange students can do it in French.

Dancing is often a strong cultural element for countries. In order to strengthen the communication and sharing among students, the school gives them the opportunity to present their traditional dances. Therefore after several meetings at the School to learn and teach the dances, students prepare a choreography together that they present on the day of all the final projects.

Game nights are held at the school several times during the year. The aim is to invite French and exchange students to spend a convivial evening together whilst playing. The different participants can make the most well-known games from their respective countries known.

After the games, we have gastronomy! Food is ideal for entertaining and plays a significant role in culture! These “gastronomic moments” are an opportunity for our international students to make the specialties from their countries known to everyone at IESEG.

The school offers students the possibility of trying their hand at producing a newspaper with illustrated articles and written in different languages. It is published on a Facebook page called “IÉSEG – Le Petit Journal” which allows students to like, comment and share.

French and exchange students also have the possibility of watching movies and participating in discussions on different themes during the screening.

In either groups or individually, the students create photographs on a particular theme with captions in their language. During this semester, they worked on “Lille in detail” and an exhibition was organised at the School. The photographs will remain on display for a few days to allow everyone to appreciate the work and the originality of the student artists.

Our goal through these activities is not only to improve the integration of foreign students at the school but also to open the world up to French students. And also to encourage them and get them used to being interested in the different cultures that we are we are fortunate to welcome at IESEG and therefore create a richer environment.